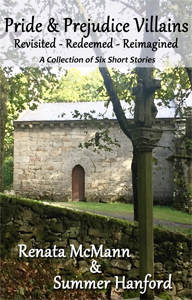 We have already published three stories that give villains a happy ending: Mrs. Bennet’s Triumph (a bonus short story found on this site as well as at the end of The Second Mrs. Darcy), Caroline and the Footman, and Mr. Collins’ Deception. We are currently working on Mary Younge (pun intended) and have plans for Lady Catherine’s Regrets. The story about Mrs. Bennet is a Pride & Prejudice variation. The others try to be largely consistent with the original but have a separate story within them.

Jane Austen wrote villains who were only slightly villainous. We’ve discussed Caroline Bingley and Mr. Wickham on this website. They are actually the most villainous of the Pride and Prejudice villains because they actively advanced their own interests at the expense of others. The other ‘villains’ are perhaps stupid and self-centered, but think they mean well.

We don’t know anything about Mrs. Younge. We don’t even know for certain that she was ever married, because sometimes women over twenty-five were given the title Mrs. even if they hadn’t married. Was she duped by Wickham? Was she a plant to facilitate Wickham’s marriage to Georgiana Darcy? If so, how could she trust him to give her a share of the money? Was she so enamored by Wickham that she was willing to ruin her career by helping him? How old was she? What was her background? How was she able to run a lodging house after being fired in disgrace? Our answer should appear in the summer of 2015.

Jane Austen didn’t create the Wicked Witch of the West or Hannibal Lector. She created people. How many rock stars have a little bit of Lady Catherine in them? They may even hire their own Mr. Collins, who is an overstatement of yes-men. Mrs. Bennet is an exaggeration, but how many mothers are frantically trying to do what they can to help their children? Jane Austen speaks to us because she saw human truth in her limited world which was, in her words:  “the little bit (two Inches wide) of Ivory on which I work with so fine a Brush, as produces little effect after much labour?”